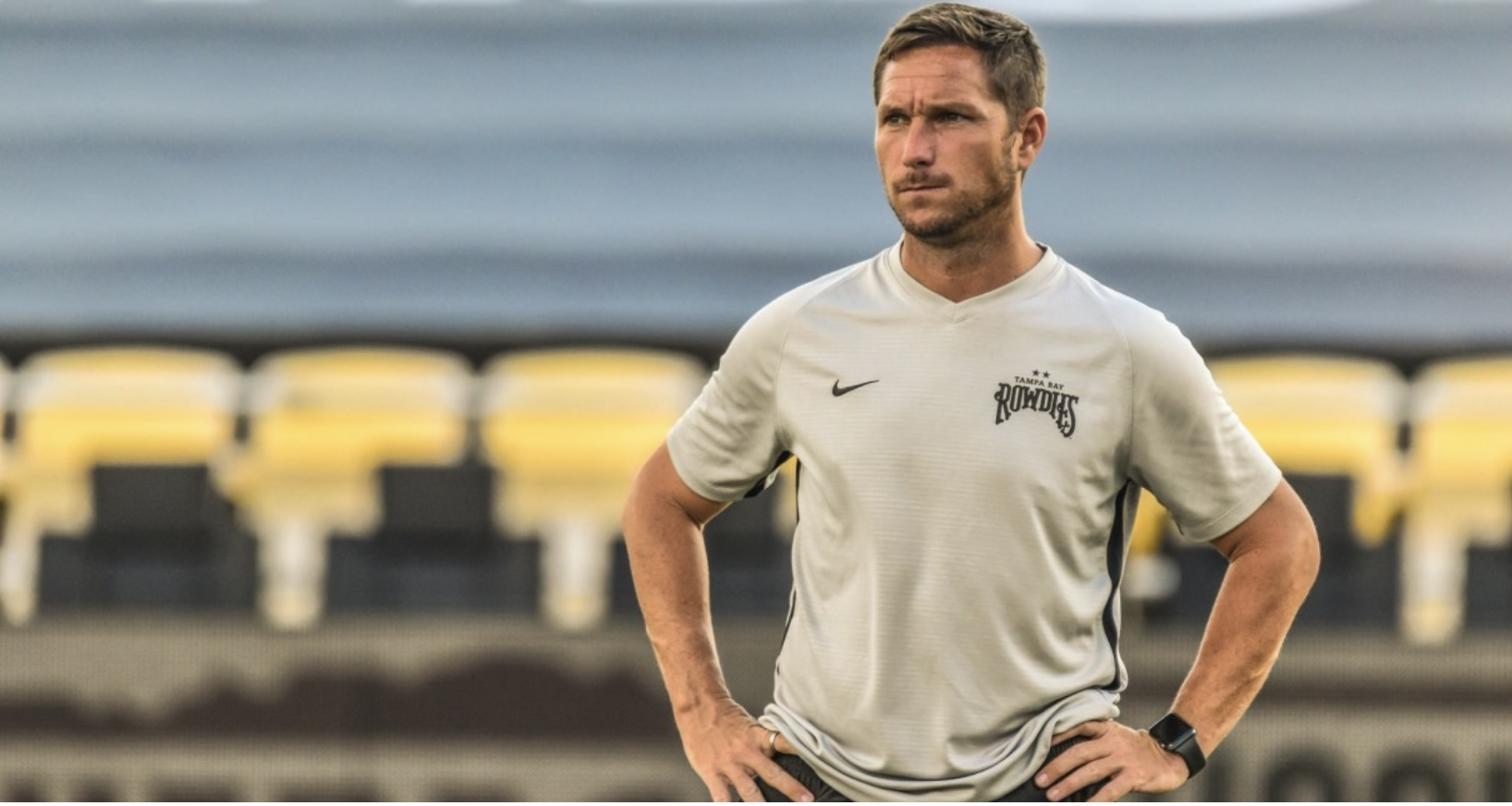 Chad Burt knows a thing or two about the soccer scene in Tampa Bay.

A native of St. Petersburg, Burt grew up playing the game in the region through the 90s and early 00s. When he was just a few years old his father Hans founded the local youth soccer club Stricty Soccer FC, which still operates today. After playng for the University of Tampa in college, Burt eventually signed his first professional soccer for the reincarnated Tama Bay Rowdies (then called FC Tampa Bay). Now Burt is starting out his professional coaching career as an assistant coach with the Rowdies.

He’s sort of the definition of a hometown product.

“It’s all kind of worked out timing wise,” Burt says of his journey from Rowdies player to Rowdies assistant coach.

“You can’t put a price on scoring a goal or winning a game and you’re able to look up and your family’s there with you and be able to enjoy that experience with everyone. Not everyone gets that chance. I’ve been very fortunate to do those things.”

Unlike assistant coach Kevin Foley, Neill Collins didn’t have a longstanding relationship with Burt. Collins only became familiar with Burt in the last couple of years, watching him go above and beyond coaching in the youth ranks. When taking over two years ago, Collins made it a point to start increasing the Rowdies’ presence in the local soccer community. Burt has been key in that effort, volunteering his own time to bring in players and help the Rowdies run talent identification camps. He also helped run the Yellow and Green Dream camp that the Rowdies conducted with Norwich City FC last summer.

“He was willing to go that bit extra,” says Collins. “He wasn’t getting paid but he was coming in and he was doing it for all the right reasons; because he’s an ex-player and he also wants to work at the highest level possible. He did a lot of work with the camp with Norwich and worked extremely hard. He’s such a hard worker and not someone that expects to be handed things on a plate. I was delighted to be able to offer him the opportunity and his reaction to coming back was excellent.”

From Burt’s perspective the Rowdies have been doing more than paying lip service to the idea of building a pathway for local young players. He believes they’ve followed through on their promise and have taken steps in the right direction since Collins took control. There are no politics to the process. It’s only been about finding the right players, regardless of their youth club, and getting them a chance to experience a professional environment. This year the club inked Obafemi Awodesu, Hayden Morgan, Landon Ameres and Julio Plata to USL Academy contracts. If not for the pandemic, those players would have had a very good chance at seeing competitive minutes for the Rowdies this year.

“I’ve had players in the hospital that Rowdies guys have reached out to me to check on,” says Burt. “One guy was going through a really tough time and four Rowdies guys show up to the hospital. And they’re checking on him even weeks after, you can see there’s real care.

“There’s an excitement around the area. You bring in a Femi, a Hayden, a Landon, these guys that are on these academy contracts, there is an excitement to it. You feel like you have an opportunity. You have kids that are working a lot harder just because that’s out there. In years past it wasn’t like that at all, especially from the start of it. It’s grown immensely.”

Since he retired from playing at the end of 2015, much of Burt’s energy has gone toward Strictly Soccer. He was actually on the field coaching at Strictly Soccer when Collins called asking him to join the coaching staff.

Burt, 32, says he never really thought he was in contention for the job until he got that call. The former Rowdies striker always thought it’d great to join the club in some capacity, but he likely never expected this kind of opportunity to come his way so soon. He’d kept up a good relationship with Rowdies president Lee Cohen and had been impressed by the progression of the club in the last decade.

“Lee’s been with the organization all the way through. He’s been the kit guy,” notes Burt. “He’s just done the work. He doesn’t just say things, he puts the work in. He’s been killing it. He’s been sensational to our organization. It’s just hard work. It’s the same thing with Neill and all these guys. Hard workers see hard workers.. Neill loved the fact that I was gonna put my head down and do whatever needed to be done. It’s the little things, just the stuff you recognize in people that you want to have on your staff. Luckily this organization has a bunch of people that are like that.”

So much has changed for the Rowdies since Burt was a member of the squad in 2010 and 2011. The most obvious difference is the team’s name change He was even a little hesitant to claim status as a past Rowdies player (For the record, all the FC Tampa Bay guys are part of the Rowdies family). It’s been so long that many of his close friends in the years since have never even seen him play and tease him about making up a past career as a player.

“Those couple years were great,” he says of his Rowdies playing days. “Two of the guys from back then are still buddies and they’ll be my groomsmen at my wedding. I take a lot from those first couple years with the Rowdies — having my family, my friends, and my club. It was just really cool to be starting my career off and have a lot of support. I loved it.”

Burt is not the first former player to step into a coaching role with the Rowdies. Collins and Stuart Campbell both played for the team as well. But their situations differ from Burt in that they were still with the club when they became coaches. Burt was away from the club for nearly a decade, playing out the rest of his career and then building his reputation in youth soccer circles.

Finding a way to keep past Rowdies invoved has been an ongoing goal for Cohen. Former Rowdies defender Andres Arango, who helped the club claim the 2012 NASL Soccer Bowl trophy, was tapped to coach the Rowdies U-23 squad in the USL League Two this year before COVID-19 cancelled the season. Don Tobin, who played for the original Rowdies in the late 80s, was also hired to lead the club’s first women’s team in the WPSL this year.

“Chad was one of the first names that we brought to the table,” says Cohen. “I give Neill a lot of credit to opening those doors when maybe past coaches haven’t. Chad has stepped up to the plate. For us it shows a pathway. Not only are we developing players to go on to play in different leagues, we’re developing players that can be a part of this community and work their way back into this organization. Chad just happens to be one that has worked his way back in through the technical side, but there will be a time when they’re working their way into the front office.”

While coaching has always been part of his plan, Burt doesn’t envision himself taking on a head coaching job in the future. The assistant role is what has always interested him the most. Beiing nearly a full year on the job with the Rowdies has only confirmed that feeling.

“People talk about the head coach and all that stuff, that’s not me,” he says. “I love that (as an assistant) you have a different level of interaction with the players. You can talk to them more freely, a little more hands on in drills in stuff. My dream job’s always been an assistant… As I was playing I got to see all the connections you have and the head coach has a different one than the assistants. I do like the side of it that I’m on.”

During the week, it’s not uncommon to see Burt, Foley or Collins jump in to a training session. Sometimes it’s easier to teach something through demonstration rather than having to explain it, according to Burt. It’s one of the benefits of having such a young coaching staff.

Burt admits it was a big adjustment coming in at the start of this year, but it didn’t take long for him to gain his bearings. The more experienced Goalkeepers Coach Stuart Dobson and Performance Coach Pete Calabrese have helped both Burt and Foley ease in to their new roles. Burt says the staff feels like “one working brain” now that they’ve settled into a good groove together.

“I think what makes us work together is we all know we’re all young coaches and we don’t know everything. We’re all learning. You have three hungry coaches that are eager to learn and better themselves along with the team. We always reflect after the games and training and how do we get better. You also have people like Dobo and Pete, who are so great and veterans in their field. I’ve learned so much in this little bit of time about everything you can.”

The passion to work with kids hasn’t diminished at all for Burt now that he’s gotten in the professional game. His father is busier than ever heading up Strictly Soccer and Burt is still active with the club as well. While it may not be the biggest youth outfit in the region, what Strictly Soccer has done in developing young players is quite impressive. Around 171 Strictly Soccer players have gone on to play in college, while a dozen have reached the professional level.

Right now Burt says he has about half a dozen players with serious potential to reach the next level and he takes great pride in knowing he can help them achieve that.

“Now I’m at the phase these last two years, where I’ve been coaching so much at the youth level these kids are coming back from college,” he says. “Hans has always had that since he’s been coaching for so long. I’m getting my first taste of those guys coming back and talking about how much it meant to them and how much it touched their lives. Now I’m starting to get players I coached at 10, 11, or 12 graduating college. It is a cool experience. It kind of touches you emotionally because you do put in a lot of time and effort.”